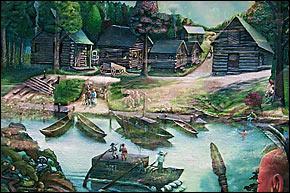 In mid-March, I gave a talk to the Woman’s Club of Cherokee Village, AR. When I was first asked to speak to them, I thought they wanted me to give a general “What do Arkansas State Parks have to offer?” presentation, which is a fairly common request. I was very excited, though, when I realized they wanted me to talk specifically about the park I am an interpreter for, Davidsonville Historic State Park in Northeastern Arkansas. Never heard of it? Neither had these ladies, which is why they wanted to learn more.

In 1815, Davidsonville was the first planned town in Arkansas and held Arkansas’s first post office, land use office and courthouse. This is the original town plat of Davidsonville.

During my talk with the Woman’s Club, I explored Davidsonville’s rich history. I gave them the facts: created in 1815, Davidsonville was Arkansas’s first planned town; it was the location of Arkansas’s first post office, land use office and courthouse; by 1830, the town was no more; today, nothing above ground remains of the town.  I also tried to breathe life into those facts: nearly two hundred years ago, this state park had been home to many frontier families; babies were born here; couples were married; others were buried; this was a bustling town where lives had been lived. After painting them a picture of the town that once was, I explained how we know so much about

Artifacts like these jaw harps and dice, unearthed at Davidsonville, show the townspeople lived lives that included leisure time.

Davidsonville: archeological excavations by the Arkansas Archeological Survey, which have uncovered hundreds of thousands of artifacts, and court documents that have managed to survive all this time. When my presentation ended, I had more than one woman tell me, “I can’t believe I never knew about Davidsonville!” 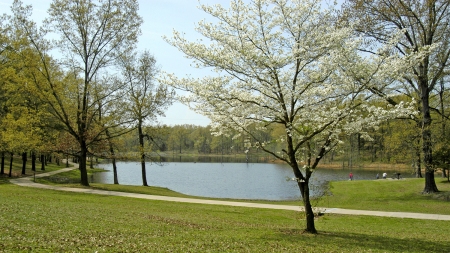 Heather Hoey has been the Park Interpreter at Davidsonville Historic State Park for a year and a half. Before becoming a full time interpreter, she was a seasonal interpreter at Toltec Mounds Archeological State Park for six months. She grew up in the Little Rock area and graduated Earlham College in Richmond, IN with a degree in Geosciences.

This entry was posted on Monday, April 12th, 2010 at 9:02 am and is filed under Archeology, History, Recreation. You can follow any responses to this entry through the RSS 2.0 feed. You can leave a response, or trackback from your own site.

One Response to Hidden Treasures